Concerns have been raised about a health and wellbeing survey which asks teenagers detailed questions about sex.

The Scottish Government census features questions like “How much, if any, sexual experience have you had?”

The survey is for pupils in fourth, fifth and sixth years and councils will administer it.

The youngest fourth year pupils can be 15.

Councils can choose which questions to ask and children and parents can opt out completely.

A group set up by the Scottish Government created the questions in the poll. The group includes their own representatives and analysts, Public Health Scotland, local authorities, schools and Education Scotland.

In this article, we explain some of the questions in the survey, see ow local figures feel about it, and allow you to have your say with our poll.

The first set of questions asks:

Depending on their answers, pupils may then be asked:

Again, depending on earlier answers, pupils may then be asked: 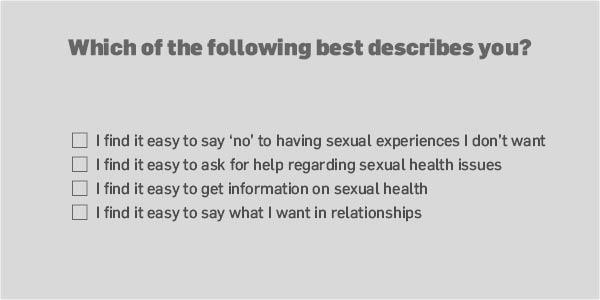 ‘Parents kept in the dark’

Politicians from the north-east have raised doubts about the nature of the questions in the health and wellbeing census.

Alexander Burnett, MSP for Aberdeenshire West, said he believes parents have not been told about the potential contents of the poll.

He is also demanding answers about how the information from the survey will be used.

Mr Burnett said: “As a parent, I share the public’s concerns about the suitability of these questions for different age groups.

“There is an appropriate way to get this level of information.

“And I hope that local councils will take the needs of children and parents on board and substantially adapt these surveys.

“Parents have been kept in the dark about this by the Scottish government, which has been characteristically opaque in providing the questionnaire contents in the first place.

“The questions of any such survey should be publicly available before it’s completed.

“I would also like some guarantees in place over pupil privacy, and how the information will be processed by the Scottish government.”

Aberdeen councillor and Liberal Democrat education spokesman Martin Greig said the survey should be “rigorously controlled” it has to be made clear why the information is being collected.

He believes it may prove to be useful and is hopeful it has a “public health benefit.”

Mr Greig said: “The point of gathering the data could be clearer.

“There has to be a definite public health benefit that will result from collecting intimate and personal information.

“Young people and need more health and care services to meet their needs and this kind of exercise might help to identify vulnerabilities in the younger generations and show how to target the increased resources in their interests.

“The whole process has to have integrity. Everyone has to be reassured that this consultation will be managed in a sensitive and confidential way.”

Pupils would complete the health and wellbeing census during class time on computers or tablets.

Older high school kids will also be quizzed on topics also including drug and alcohol use and mental health and all will be asked about physical activity, diet, mental health, bullying, sleep patterns and body image.

A Scottish Government spokeswoman said: “The census is administered by local government to provide information about the health and wellbeing of children and young people, to help improve the support that they provide.

“Health and wellbeing surveys like this one are not new and play a crucial role in ensuring children and young people have access to the help, advice and services they need.

“Parents and carers can opt out from their child taking part, and the child themselves can choose to opt out.”

She added some councils are not taking part in the survey because they have either done their own, staffing pressures or using existing local statistics

What do you think? Should pupils be asked these questions? Take our poll.

More from the School and Family team

Argyll teacher who said he ‘would happily kill’ colleague struck off

Covid in schools: Closures in Aberdeen lead to a spike in absences