With wonderful cliff and sea views towards Bressay, Sandwick and the vast expanse of the North Sea to be enjoyed from their stylish, modern detached house, it’s no wonder John and Caroline Tait don’t want to move too far away from their lovely home, at Number One, South Punds Park in Levenwick, Shetland.

But their next home will be pretty close.

They built the large detached house four years ago, but are now selling up as, with two grown-up sons living at home, Lewis, 20, and Harry, 16, they want to build a different style of home, one that will allow the boys to have their own wing as well as a large workshop and shed that can accommodate their growing love of all things mechanical.

Caroline, 41, said: “John has been building houses since he started work at 16 and has been working as a self-employed builder for about 14 years now. Normally he builds homes for other people as in Shetland, often the easiest option is to build a small home for yourself. 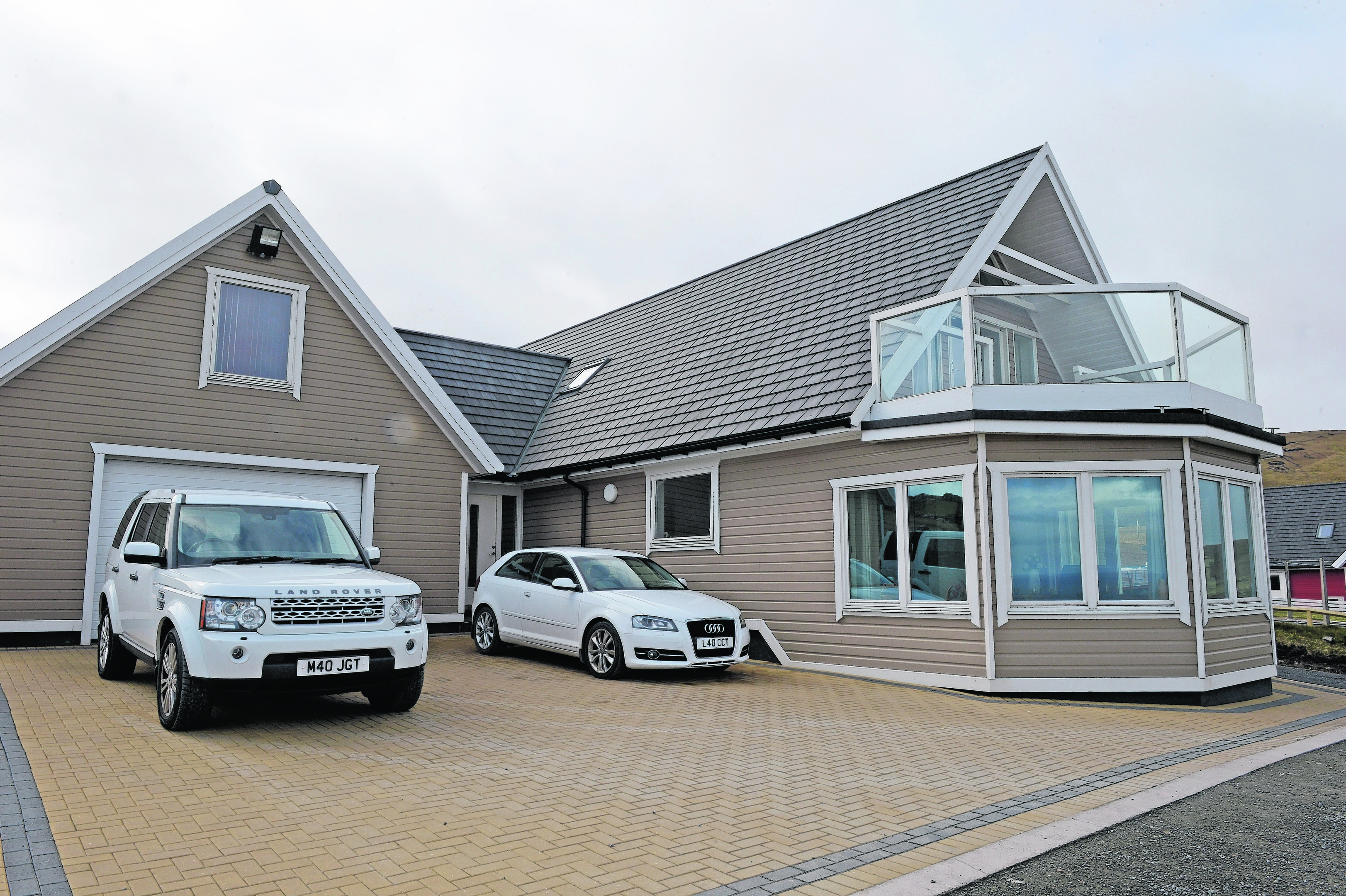 “He’s also previously built three homes for us, which we have lived in then after a while, sold and moved away from. This will be the first time we will be staying next to a house we’ve previously built and lived in.

“We bought the land at Levenwick, which is around 18 miles from Lerwick, in 2008, with the idea of building a house for ourselves on it.

“Good friends of ours liked what we were doing and, like us, loved the views so asked if we would build them a similar-style house here, too, so we built a second house. The third and last house on this development will be a bungalow and much bigger workshop for ourselves, so we’re really not moving too far away.”

The house is modern and tastefully decorated throughout. Accommodation on the ground floor includes two large bedrooms, each with built-in wardrobes; a family bathroom with bath, soak-away shower, WC and basin; a handy large utility room with lots of storage space and a charming L-shaped, open-plan sitting room, kitchen and conservatory/dining room.

“We’ve gone for a minimalist and sleek look for the kitchen which is fitted with base units featuring cream gloss doors topped with grey chunky worktops. There’s a central island, two eye-level ovens, an induction hob and huge walk-in larder,” said Caroline, who works as head cook at a local primary school.”

From the kitchen, three steps lead to a large conservatory which enjoys wonderful, panoramic views. “We use this as a dining room and the table can seat 12, so it’s a good-sized room,” said Caroline. 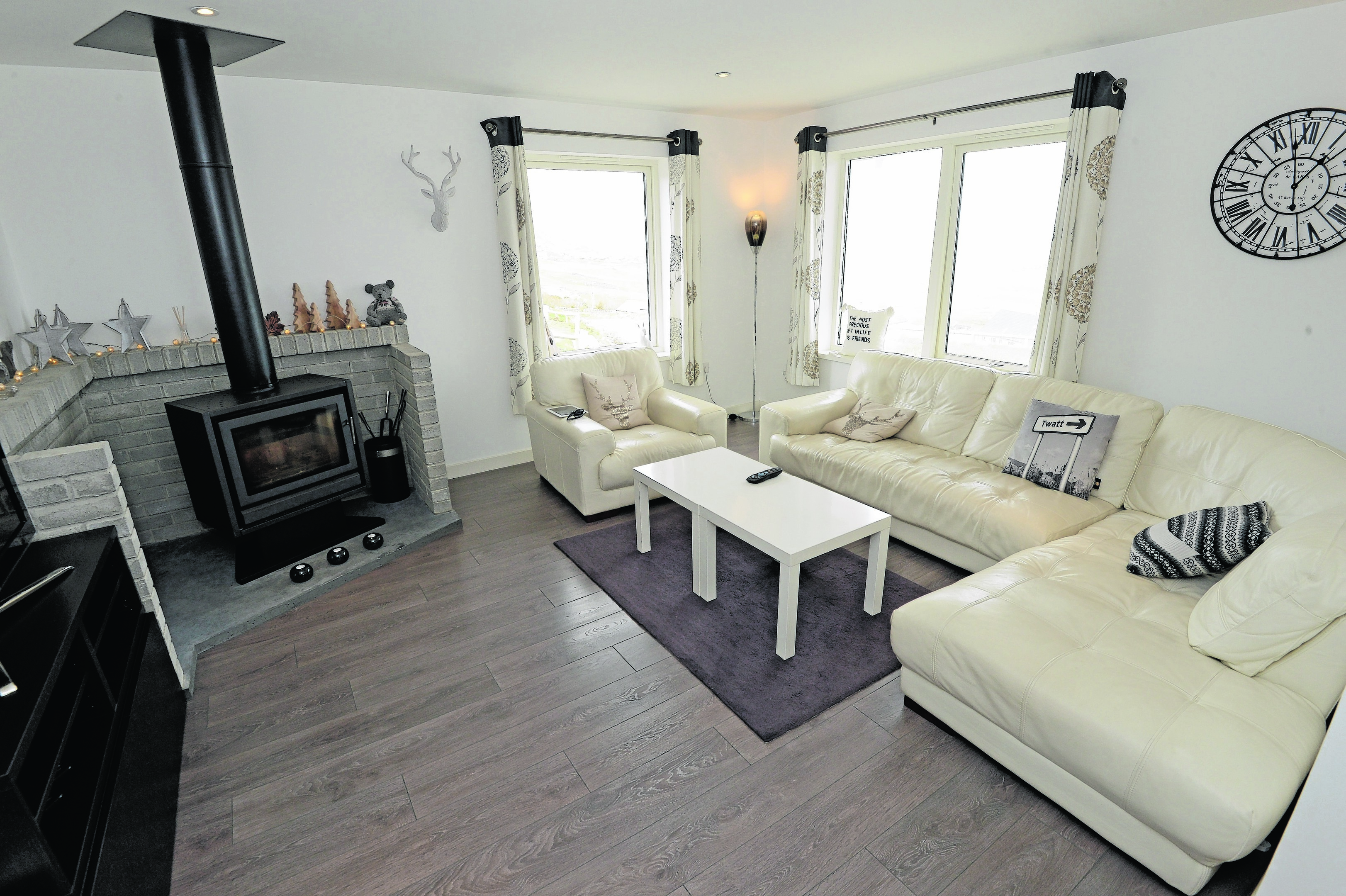 There’s also an office, which could double up as a fifth bedroom; guest double-bedroom with walk-in wardrobe and en-suite shower room and a master bedroom with dressing room and a large, luxurious en-suite.

Particular features of note here include a lovely shelved snug area which makes an ideal place for a spot of quiet reading, and an enormous balcony, a superb outdoor space that is ideal for relaxing, soaking up the views and entertaining.

There’s lots of storage space throughout this house, which is on the market at offers over £330,000 and has internet, TV and telephone points hardwired to each room as well as Sonos wired into roof speakers in the kitchen and utility room.

Outside, there’s a considerable bit of land which includes a drying green, garden shed, a garage large enough to accommodate two vehicles and full planning permission to build a 30ft x 45ft workshop. 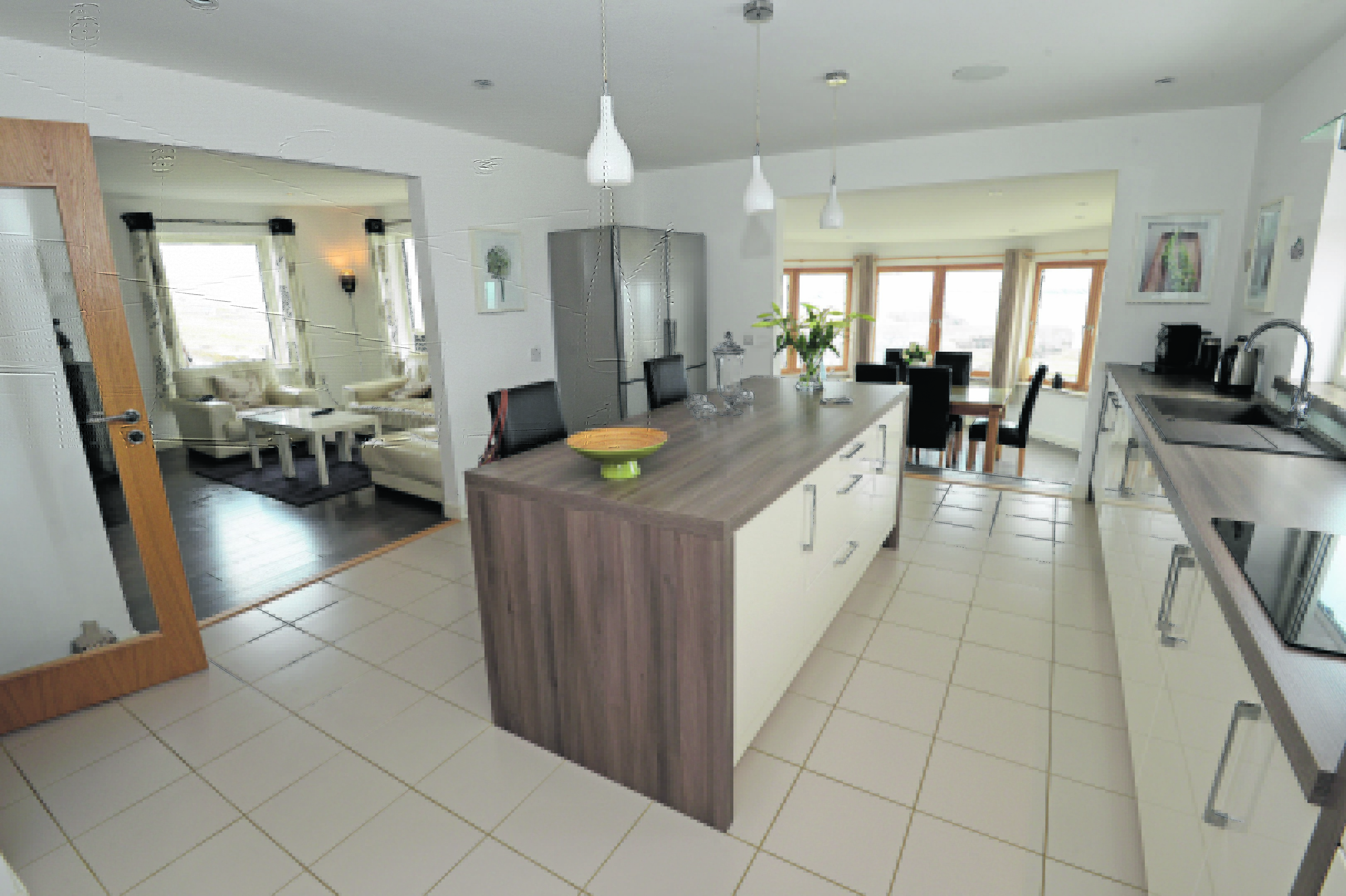 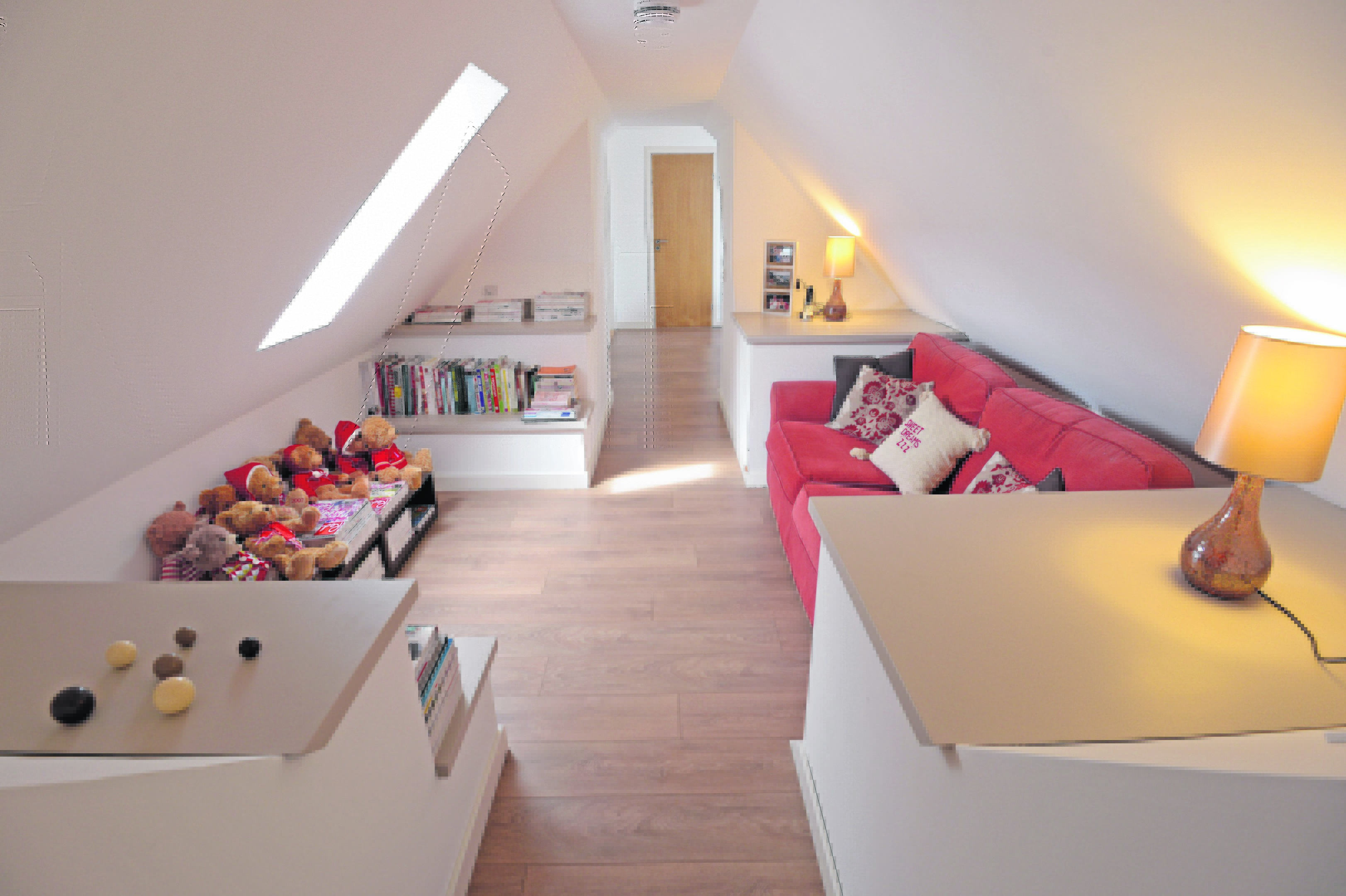 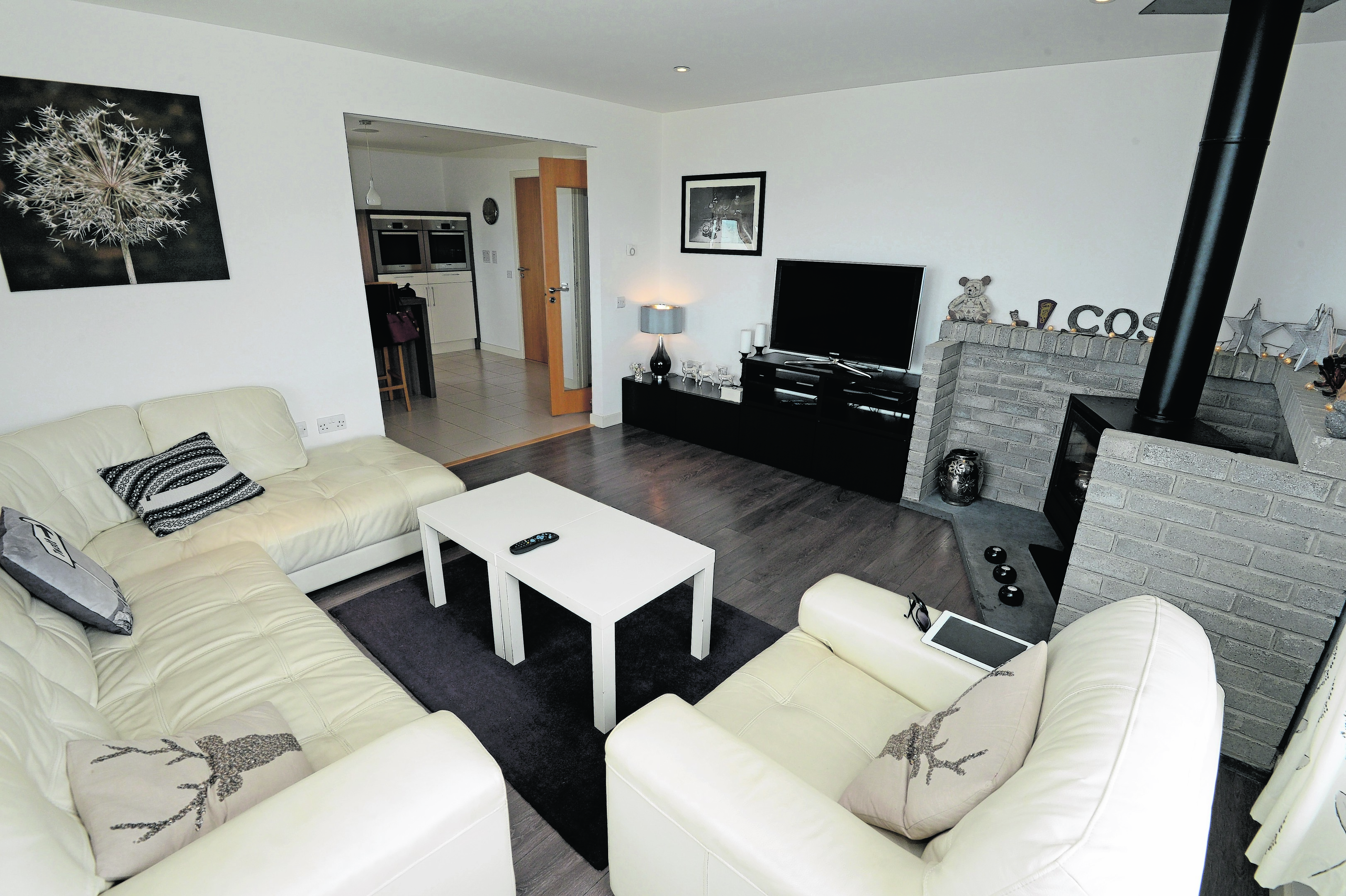 “What I like most about this house is the amount of space it has, while there’s plenty of sitting areas so no-one is ever on top of each other. I also like the area, as it has stunning scenery and is peaceful and quiet yet Lerwick, with all its facilities such as cinema and restaurants, isn’t
far away.”