A north-east man will undertake a gruelling 11-day, 235-mile cycle charity challenge through the mountains of Peru to raise funds for Scotland’s largest children’s charity.

Gideon Harmsworth will join other cyclists from around the world at what must be one of the world’s most picturesque start lines – the 15th century Incan citadel of Machu Pichu.

From the ancient stronghold, 7972 feet above the Sacred Valley, they will set out together through the Andes and make the long descent into the rainforests and jungle of the Manu Biosphere Reserve.

Mr Harmsworth’s own effort will benefit Aberlour Child Care Trust and is being driven by the loss of his cousin, Michael, in whose memory he has dedicated his adventure.

The Aberdonian will head-off for the lost city in just three months’ time and an intense period of training is already underway.

Mr Harmsworth said: “Last Christmas my family and I received devastating news that my cousin, Michael, had died under tragic circumstances.

“We had lived near each other in Aberdeen for 14 years but over the last four years we had grown particularly close.

“We would hang around everyday going fishing, cycling and walking.

“I found it very hard to deal with his death but found comfort in attending Catalyst Vineyard Central Church.

“At Church we were taught to look after the poor and needy and to treat others how you wish to be treated.

“With this in mind, I decided to take on a challenge in memory of Michael and to raise money for charity.”

Mr Harmsworth visited the Aberlour Family Service and met the families supported by the charity, whose “amazing work” and devotion to the children deeply touched him.

Over 7,500 vulnerable children and their families across the country benefit from a range of services provided by Aberlour Family including residential and fostering, recovery and early intervention. 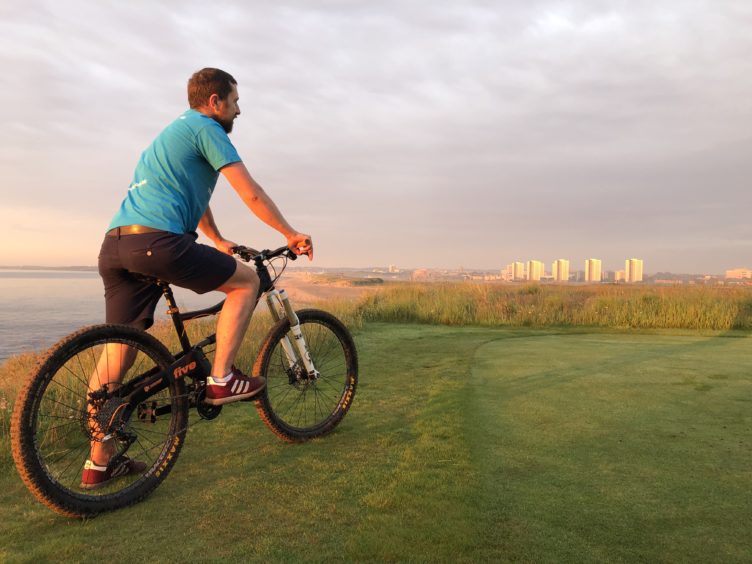 He added: “Their passion for helping children who don’t have the best start in life is exceptional and motivated me to raise money for them.”

Catherine Thomas, head of Fundraising at Aberlour, said: “Fundraisers like Gideon are inspirational.

“He has taken a very traumatic time in his life and turned it into something positive for Scotland’s children.

“We wish him all the best with this training and will be supporting him every ‘pedal’ of the way.”