A yellow weather warning has been issued for heavy rainfall in the west Highlands.

The alert comes into force at 3pm and covers Monday as well.

The spell of heavy rain is expected across parts of western Scotland which may lead to some flooding and travel disruption.

It reads: “Rain will affect western Scotland through late Sunday and Monday before clearing on Tuesday morning. This will often be heavy and persistent, especially over hills.

“Many locations in this region will see 25-50 mm of rainfall, with the heaviest rain over high ground where 100-150 mm is likely to fall. The rain will be accompanied by strong winds, bringing a spell of coastal gales and gusts to around 50mph over hills and headlands.”

You can watch the full forecast from the Met Office above.

Meanwhile the Scottish Environment Protection Agency has issues flood alerts for the Highlands and Moray. 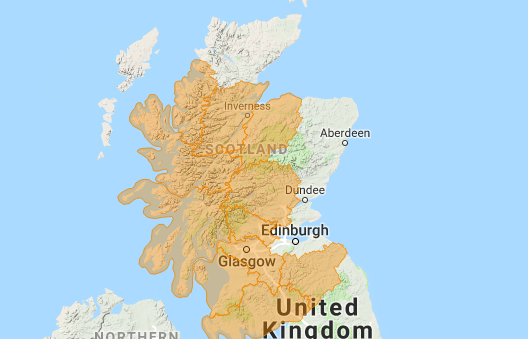 The amber ‘Be Prepared’ warning reads: “A period of heavy and persistent rain will affect the area from Sunday evening and through parts of Monday, which could cause flooding impacts in this alert area.

“Most likely at risk are urban areas and the transport network, which could see flooding from surface water and small watercourses. This could include flooding to low-lying land and roads with difficult driving conditions. Some rivers are expected to respond to the heavy rain and could cause disruption due to flooding from Sunday evening.”

The alerts are for Argyll and Bute, Easter Ross and Great Glen, Findhorn, Nairn, Moray and Speyside, Skye and Lochaber and Wester Ross.