Persistent heavy rain followed by showers are likely to produce some localised flooding and travel disruption on the west coast, the Met Office has warned.

A yellow alert has been issued for west Highlands

It says blustery showers will turn to more persistent rain on Thursday morning, turning heavy at times and continuing for the rest of the day.

The warning continues: “The rain will be accompanied by gale force southwesterly winds, with potential for gusts of 55-65 mph around coasts and hills. The rain will turn more showery overnight though further heavy and prolonged showers are likely on Friday morning. 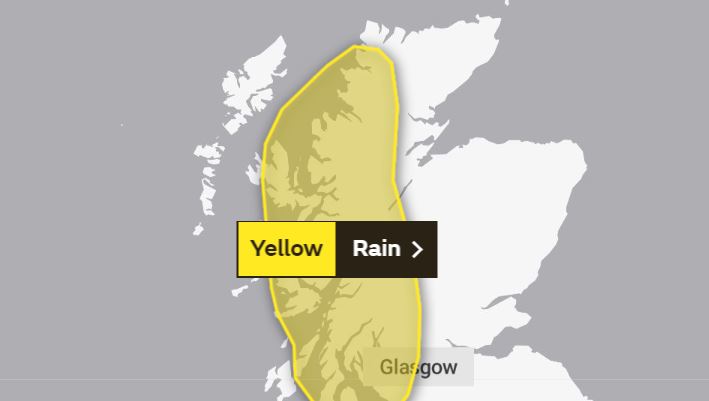 “40-60 mm of rainfall is expected widely across the warning area, but nearer 70-80 mm over the West Highlands and a few prone mountain locations could exceed 100 mm within a 30 hour period. 20-30 mm of rain is expected to the south of the Central Belt. The showers will become more scattered by Friday afternoon, by which time the winds will also have eased.”

The Met Office said bus and train services could be affected with journey times taking longer and spray and flooding on roads may also cause issue. There could also be some minor interruptions to power supplies and other services are possible.

The warning covers from 6am today to midday on Friday.

The alert says: “Heavy, persistent rainfall is expected across the area through Thursday, followed by heavy showers on Friday. This could lead to flooding impacts from rivers and surface water, particularly in western parts. Typical impacts could include flooding affecting low-lying land and roads, isolated properties and travel disruption.”