Rush hour commuters faced traffic chaos this evening after a camper van crashed onto its side outside Inverness.

The incident took place just north of the Kessock Bridge shortly before 5pm, and traffic queued back for several miles to the Eastfield Retail Park and towards the town centre afterwards.

Police, fire crews and an ambulance attended but it is understood that nobody was seriously injured.

The camper van rolled across both lanes of the northbound carriageway, blocking it entirely and leaving commuters travelling north on the A9 Inverness to Thurso road facing significant delays. 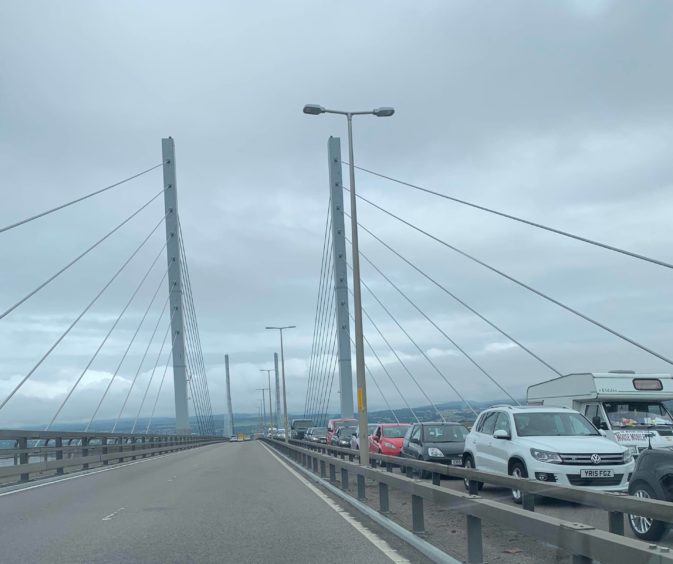 A police spokeswoman said: “It appears ambulance crews were dealing with one man with minor injuries, believed to be a bloody nose.

“However, given the time of the afternoon, the road was very busy and there was a certain amount of delays to say the least.”

The stricken camper van was eventually towed away at 7pm but motorists were still complaining of tailbacks more than an hour later.

Diversions were put in place on the Beauly road while the emergency services removed the blockage.

Meanwhile, queues of traffic backed up on the A82 Glasgow to Fort William road for at least a mile after a motorcycle crashed near Bridge of Orchy.

Police, ambulance and fire crews attended and one man was taken to hospital while the road was closed.

Police were alerted to the collision shortly before 4.35pm.

One lane on the busy route, which winds through Rannoch Moor and Glen Coe, was closed for more than three hours as police carefully directed traffic through the remaining space.

An air ambulance was called to take the motorcyclist to the Queen Elizabeth University Hospital in Glasgow, where police later described his condition as “stable”.

A specialist retrieval vehicle was called to remove the motorcycle.

A police spokeswoman said: “An injured man was taken by ambulance to the Queen Elizabeth University Hospital in Glasgow.

“One lane remained open to allow traffic to pass through, while a recovery operation was in place to remove the motorcycle.”

Vestas takes most radical step yet toward zero turbine waste

Vestas Wind Systems, the world’s largest maker of wind turbines, has pledged to eliminate all waste in the production of its machines by 2040 as part of its drive to hit carbon neutrality by the start of the next decade.