The north’s busiest bridge has won listed status as a structure of special architectural interest.

The Kessock Bridge has been recognised by Historic Environment Scotland (HES).

The 37-year-old structure is described as a major piece of 20th century engineering and a prominent coastal landmark.

It was the first multi-cable-stayed bridge built in the UK.

It was also among the first to apply special ‘quake-proof’ technology, designed to allow for seismic and geological movement from the Great Glen Fault.

This is the third bridge in Scotland to be listed by HES in the past year, after crossing at Erskine – over the Clyde – and Kylesku in Sutherland. 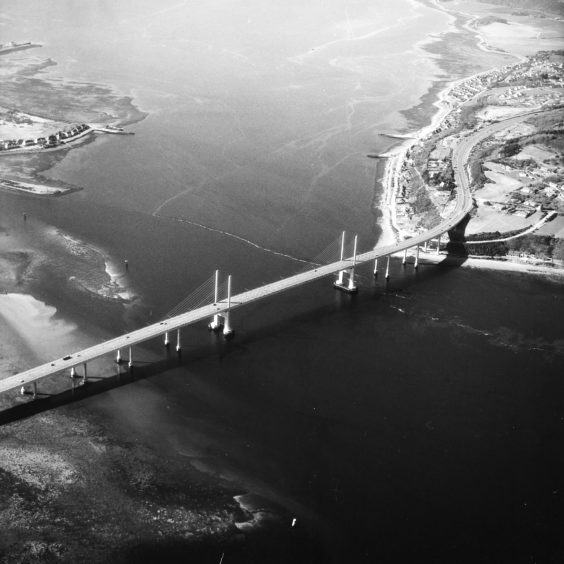 The bridge – known as Drochaid Ceasaig in Gaelic – won the combined design and construction Saltire Award in 1983, the year after it opened to traffic.

“One of the many innovations of the Kessock Bridge was its ability to withstand extreme weather and earthquakes resulting from the Great Glen geological fault. It also contributed significantly to driving economic growth in the area, making travel between Inverness and the far northeast significantly easier.

“We have such a strong heritage of bridge building in Scotland and the Kessock Bridge is an important part of that distinguished tradition.”

Michael Matheson , Scottish secretary for transport, infrastructure and connectivity, added: “I am delighted that Kessock Bridge has been recognised for its historically unique importance as a listed structure.

“The cable-stayed bridge is a vital connection to and from the far north of Scotland and has been central in supporting economic growth in the region.

“Its iconic design, length and position overlooking Scotland’s highland capital has rightly earned its new status and I look forward to its continued success as a key piece of Scotland’s transport infrastructure.”

Connection between the Highland capital and northern communities across the Beauly Firth was either by a ferry crossing from North Kessock or a 20-mile detour.

By the late 1960s, it was decided that a bridge over the Beauly Firth was needed and construction began in 1976.

The bridge was designed and built for the Scottish Development Department (SDD) by the designers Dr Hellmut Homberg (super-structure) and Trafalgar House Engineering Services Ltd (sub-structure).

Could the Kessock Bridge be given listed building status?

The four towers are prominent on the skyline, and the bridge is a significant foreground feature when viewed from the shore at Kessock and Inverness, particularly when illuminated at night.

Construction of the bridge made the ferry service redundant, but significantly reduced journey times between Inverness and the far north, making it easier for commuting and shopping at Inverness.

Thumbs up for Kessock Bridge as it’s awarded listed status