Kim Little struck five times to put Scotland on the way to an emphatic 8-0 win against Cyprus at Easter Road.

Little, who hails from Mintlaw, ran the show at the home of Hibernian and had two before the break.

Claire Emslie had opened the scoring and Jane Ross got in on the act before Little pounced thrice more in the second half.

An eighth from Caroline Weir as stoppage-time approached underlined the huge gulf in quality between the two sides.

After all the questions of Shelley Kerr and her side in the build-up to this opening Euro 2021 qualifier, an emphatic display was required and duly delivered against very limited opposition.

Scotland name a full-strength side in the capital, with full-back Hayley Lauder winning her 100th cap.

Arsenal midfielder Little had two chances inside the first seven minutes for the home side. A tidy exchange with Lisa Evans produced a shot from 12 yards straight at goalkeeper Eleni Ttakka, before crashing Lauder’s cut-back high into the stand.

But it took just four minutes more for Scotland to go in front. Evans was afforded freedom on the left and crossed to the back post where Claire Emslie was waiting, as she directed a header back across goal inside the far post. 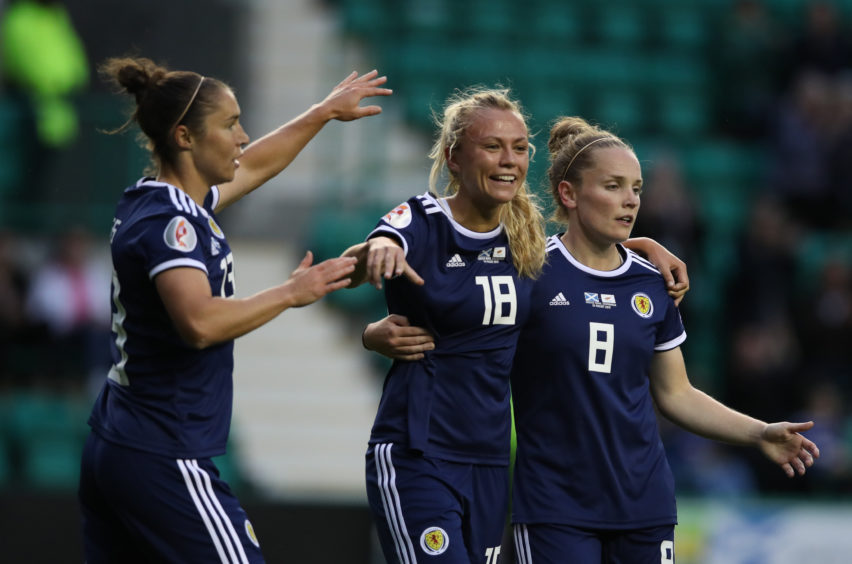 Claire Emslie is congratulated by Jane Ross and Kim Little after opening the scoring.The lead was doubled by Little on 20 minutes, as she collected Caroline Weir’s pass, nipped round Ttakka and rolled the ball into an empty net.

Jane Ross was twice denied by Ttakka in quick succession after Kostantina Pafiti’s misplaced header played her in, with the stopper repelling Ross’ first effort and then standing tall to keep out the rebound.

The hosts’ dominance was apparent throughout the first half and they were even further clear before the break. Ttakka diverted an Evans shot around the post before Little played a one-two with Ross and danced clear, before finishing via the inside of the post.

A deserved fourth game seven minutes into the second half as Evans’ cross to the back post was returned to the danger area by Emslie, with Ross prodding into an unguarded net from three yards.

Little completed her hat-trick just after the hour mark as Ttakka spilled what looked like a relatively simple ball, with Scotland’s imperious number eight picking up the pieces to crash in her third.

Her fourth came when she was poorly marked and given time to chase on to Weir’s through ball, slotting through Ttakka’s legs, before glancing in a long ball from Aberdeen-born skipper Rachel Corsie to complete her individual tally.

Weir was not to be left out as she hammered in from the edge of the box, rounding off a goal-laden night for the Scots.