Women in the north of Scotland, affected by controversial changes to the state pension age, have insisted “the fight goes on” after losing their landmark High Court case against the Government.

Nearly four million UK women born in the 1950s have been affected by the changes, introduced by successive governments in an attempt to ensure “pension age equalisation” by raising it from 60 to 66.

They have lost up to six years of their state pension, with little or no notice, due to the Pensions Acts of 1995 and 2011, despite, in many cases, having paid more than 40 years of National Insurance contributions.

The decision, announced in the Royal Courts of Justice yesterday, found there had been “no discrimination based on age” and “no direct discrimination on grounds of sex”.

But the WASPI Aberdeen and Shire joint coordinator, Lorraine Rae, told the Press and Journal: “This is a very sad day for women born in the 1950s.

“It will cause a great deal of anger and heartache as well as further serious financial difficulties for many women.

“1950s women started work without the protection of the 1970s equalities legislation.

“Now, it feels like we are being further discriminated against in the name of equality.

“We will carry on our campaign for justice with even more fire in our bellies.

“With a General Election imminent, MPs need to remember that we have the vote.” 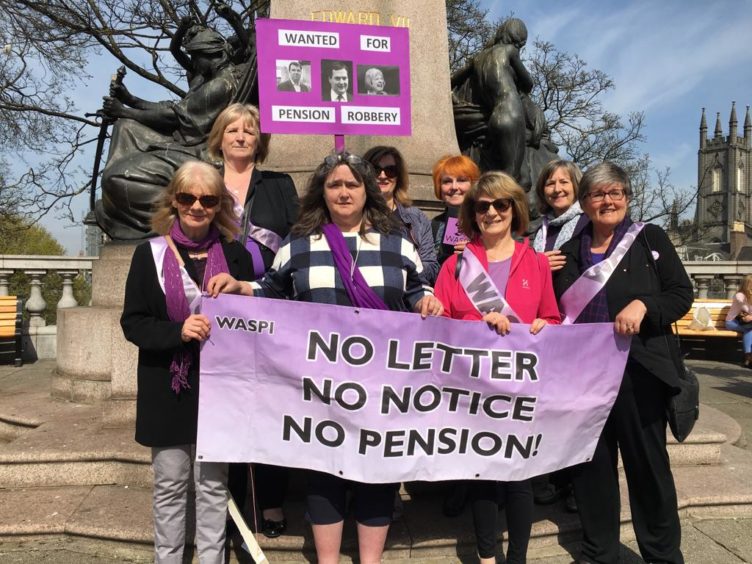 Two claimants – Julie Delve, 61, and Karen Glynn, 63 – took the Department for Work and Pensions to court, arguing that raising their pension age “unlawfully discriminated against them on the grounds of age, sex, and age and sex combined”.

The pair, supported by campaign group Backto60, also claimed they were not given adequate notice in order to be able to adjust to the changes.

Sheila Forbes, a WASPI volunteer co-ordinator in Moray, said the women were already considering the best way to proceed.

She added: “We acknowledge the efforts on behalf of Backto60 in trying to secure redress for 1950s-born women who have lost so much of their state pension.

“The expectations of some women were very high and there will be considerable disappointment today about the outcome.

“We will continue to campaign both to seek genuine cross-party support in Westminster, and to seek justice via the complaints of maladministration process.”

Lord Justice Irwin and Mrs Justice Whipple dismissed the women’s claims by arguing they did not believe there was any discrimination involved.

In a summary of the court’s decision, the judges said: “There was no direct discrimination on grounds of sex, because this legislation does not treat women less favourably than men in law.”

The court also rejected the claimants’ argument that the policy was discriminatory based on age, adding that even if it was, “it could be justified on the facts”.

However, Mrs Rae said they would continue their fight and added: “Many local women had no notice their pension age had changed from 60 to 66.

“They are having to try and find work which isn’t easy for over 60s and their savings are being used up.

“Many are concerned about how they will survive financially until they are 66.”

The issue was raised at Holyrood yesterday with First Minister Nicola Sturgeon expressing support for the WASPI campaigners.