Bouncing back from the brink of bankruptcy, America’s Motor City is roaring into action. Jez Smadja discovers a hip new city break destination

Standing on the freshly clipped lawn outside Motown’s first recording studio, an Arts and Crafts-style house on West Grand Boulevard in Midtown Detroit, I feel like a pilgrim who’s just disembarked in the Holy Land.

Located in a residential neighbourhood where every home has a front porch and a car in the driveway, it was here that in 1959, Berry Gordy Jr. laid the foundations for a music empire that would launch the careers of The Supremes, Marvin Gaye, Stevie Wonder and – after signing the Jackson 5 – an 11-year-old Michael Jackson.

Hitsville USA, the name written above the front door, has been faithfully preserved. There’s the reception desk once manned by Martha Reeves (pre- the Vandellas), Berry Gordy’s bedroom (which was often used by Marvin Gaye as a crash pad) and a vending machine with Baby Ruth candy kept religiously in the fourth column so ‘Little’ Stevie Wonder knew where his favourite sweets were.

The Motown Museum’s irrepressible guide, a lady blessed with a voice that can only come from singing in church, insists we can’t leave until we’ve sung at least one song from the Motown archives. We dutifully comply, but it feels like sacrilege caterwauling in a studio where they churned out classics around the clock, day after day, week after week.

It’s no secret that Berry Gordy modelled his record label on the car assembly lines that he experienced first-hand at the Lincoln-Mercury plant. You can’t grow up in Detroit and not have some connection to the car industry. This is, after all, Motor City.

It’s home to the Big Three – Ford, Chrysler and General Motors – and their mark is visible throughout the city, from the glass towers of the GM Renaissance Centre to the Ford Field football stadium. It’s why the inexorable decline of American car manufacturing since the 1980s has hit the city like a clean right-hook.

The most immediate effect of this downturn was on blue-collar neighbourhoods in Detroit’s East and West Side, as families who could afford to, left for the suburbs in a mass exodus. As the property market nose-dived, entire streets of homes were abandoned, leaving swathes of the city resembling Earth after the apocalypse.

And then, to everyone’s surprise, the city recorded its first population increase in 60 years.

It may be premature, but residents are calling Detroit the comeback kid. Neo-Gothic skyscrapers are being rehabbed from empty shells into loft apartments and hip hotels. One of the newest to open, the Aloft Detroit, in the 19-story David Whitney Building, boasting a spectacular four-floor atrium, has given a second life to what was one of the pillars of Downtown.

Everywhere you turn there are signs of a new wave of optimism. In the window of the Guardian Building, a neon sign reads Nothing Stops Detroit. Over in Corktown, hip 20-somethings cycle by in Detroit vs. Everybody hoodies. The clothing label started by a young entrepreneur was turned into a hip-hop anthem by Detroit’s favourite son, Eminem. The buoyant mood has even filtered down to the billboard adverts. One for T-Mobile reads, ‘A Strong City Needs a Strong Data Network’.

In that most enduring of American dreams, Detroit has become the land of opportunity. Low rents, vacant properties and a can-do attitude are transforming a city from the brink of bankruptcy into a hotbed of innovation and off-the-grid thinking. It’s become a magnet for entrepreneurs and boasts the highest concentration of commercial and industrial designers in the US. The occupancy rate for property in Downtown and Midtown is currently 98%.

The Saturday morning market at Eastern Market, one mile north of Downtown, amid graffiti-covered meat warehouses, is the most obvious sign of the city’s reinvigorated mojo.

Teeming with Detroiters and suburbanites of all races and ethnicities, this historic market stretches across five ‘sheds’. Two of them contain the farmer’s market, where spry and ruddy-faced food producers sell everything from Michigan-grown heirloom tomatoes to Detroit Bold coffee. Another shed is an avenue of blooming flowers and perennials.

Dotted around the market, Victorian storefront buildings have been taken over by galleries, delis, clothes shops and restaurants. Elsewhere, the Downtown Detroit Bike Shop feeds the growing enthusiasm for cycling, no minor achievement in the birthplace of the modern motor car.

Hand in hand with the renaissance of Eastern Market has been the explosion of a home-grown urban agriculture movement. With as much as 30% of the city’s 139 square miles left vacant at one stage, urban and community gardens have been cropping up all over the city. There’s even been talk of making Detroit the world’s first food self-sufficient city.

In the west, not far from Ford’s gargantuan River Rouge Complex, D-Town Farm covers seven acres of city-owned parkland. The project of Malik Yakini, a long-time community activist, it grows organic collard greens, dinosaur kale and carrots, and was created to address the pressing issue of so-called ‘food deserts’ for the African-American community within Detroit’s city limits.

D-Town Farm is open to visitors on Saturday mornings in the summer, when it sells its seasonal crops, and is just one of the many urban farms that are creating jobs, embellishing the landscape and generating a palpable sense of community.

Similar examples of entrepreneurial moxie are evident throughout the city. Perhaps the biggest success story of all is Shinola, the watchmaker that capitalised on Detroit’s surplus of qualified engineers and now produces 500,000 watches a year, each branded Made In Detroit.

Shinola has a flagship store in Midtown – all brushed steel and exposed brickwork – which is soon to have a second tenant. Musician Jack White of the White Stripes, a man who famously left Detroit for Nashville, has announced his homecoming with a plan to open a record shop in partnership with Shinola.

With all this newfound energy, it’s easy to forget about Detroit’s historic attractions, such as the Fisher Building, a 29-story, marble clad art deco building commissioned by car entrepreneurs, the Fisher Brothers, and described as ‘Detroit’s largest art object’.

On the subject of art, the Detroit Institute of the Arts has a truly world-class collection of ancient and modern art. The jewel in the crown, though, is Diego Rivera’s Detroit Industry Murals which adorn the walls of the central court. The Mexican artist painstakingly depicted the Ford River Rouge Factory in a symphony of blue-overalled workers – a 20th century vision of William Blake’s ‘satanic mills’ – set jarringly against idyllic panels showing Mother Nature.

Back in 1933, when Rivera was applying the finishing touches to his mural, Detroit was emerging from the Great Depression. Today, back from the brink once again, it’s looking beyond cars to rebuild its future.

It was Henry Ford himself who said that ‘failure is simply the opportunity to begin again, this time more intelligently.’ It’s a lesson Detroit has taken to heart as it accelerates at warp-speed to a brighter, smarter, greener tomorrow. 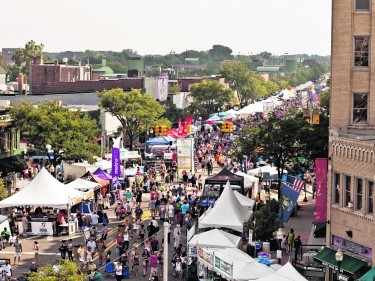 Jez Smadja was a guest of Virgin Atlantic which now flies daily from London Heathrow to Detroit from £737 per person return in Economy. Premium Economy fares from £1,167 per person and Upper Class fares from £2,657 per person.