A “broken down” fishing vessel was hauled back to shore after a mayday call was answered by an RNLI crew which was in the water conducting training exercises at the time.

The stricken boat encountered difficulties about a mile north of Macduff at about 7pm and coastguard crews from Banff were also scrambled to assist, along with the Buckie lifeboat.

But it was the RNLI team from Macduff which was first on the scene and ensured that the rescue operation was a speedy affair. 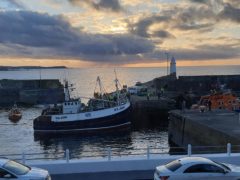 A Coastguard spokesman said: “The fishing vessel had broken down a mile off Macduff and luckily the town’s lifeboat had just gone out on exercises at the time.

“They dealt with it pretty quickly, and the boat was towed back into the harbour at about 7.45pm.”

Macduff resident Kate Underdown snapped some photographs of the fishing vessel being pulled into the port and praised the lifeboat and Coastguard teams for their “fantastic teamwork”.