Jersey Boys brings the music for the generations singing into the future. Andrew Youngson catches up with the cast ahead of their appearance in Aberdeen this spring

I was standing on the stage of the Edinburgh Playhouse on a pre-performance behind-the-scenes tour of the Jersey Boys set when the opening twangs of The Vapors’ Turning Japanese issued out of the sound system.

As if in response to some call of the wild, the entire cast of the Jersey Boys bounded on stage in varying levels of costume and make-up – at which point I beat a hasty retreat to the wings. The juxtaposition of 1980s pop music and the staging for the 1950s-based musical seemed a little
odd, but given the era-spanning nature of the show I was about to see, perhaps it wasn’t so strange after all.

Thankfully this was merely the pre-performance warm up music, offering the cast some high-energy beats to get in the mood for an even higher-energy matinee performance.

Continuing the tour backstage, the picture became a little clearer. An entire wall filled with time-specific microphones ranging from 1960s stand-up mics, to the 1980s equivalents met my gaze, before my eyes ultimately settled on four iconic red jackets, each suspended proudly on their own hangers. 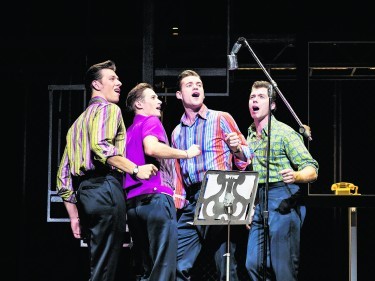 A mere hour later, I would see those jackets on stage, this time filled by the front line of actors who are now bringing the music and story of Frankie Valli and the Four Seasons to life in the UK tour of Jersey Boys.

A wonderful and often poignant dramatisation of the story and men behind such chart-topping hits as Walk Like a Man, Sherry, Begging and You’re Just Too Good To Be True, the musical has been met with universal acclaim since it was first staged in San Diego in 2004. From there, it transferred to Broadway, and then spun out into a huge web of national and international productions, and most recently in a film helmed by Clint Eastwood.

The success of the Jersey Boys, the cast told me after the matinee, is of course helped greatly by the music, but largely comes down to the strength of the story. Following the four main men – Frankie, Tommy DeVito, Bob Gaudio and Nick Massi – in a documentary style, the musical depicts the real story behind the 30-year rise and fall of the Jersey Boys – jail-time, relationship woes and run-ins with the mob included.

“Ninety seven percent of the stuff that happens actually happened in real life. As bonkers as some of it may seem,” said Matt Gillett, who plays the role of music producer Bob Crewe – the man who first signed the group at the turn of the 1960s.

“I think it’s worth pointing out that this isn’t just a jukebox musical. It’s a true story,” added Sean Kingsley, who embodies the bombastic role of mob boss Gyp DeCarlo.

“You could take all the songs out and it would still be a good play, unlike a lot of jukebox musicals, which if you did that would just be nonsense.”

That said, one thing which Jersey Boys does extremely well on the musical-front is offer up crowd-pleasing hit after hit, just as the best of its jukebox cousins do.

“They’re such good songs, and when you hear them done live, it’s joyous. They really transcend the generations,” said Tim Driesen, who plays Frankie himself. 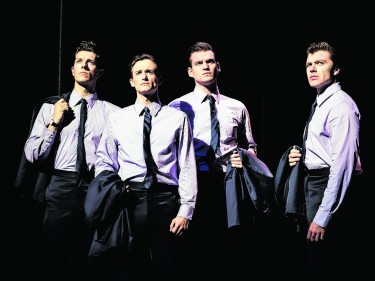 While he nails the signature falsetto tones of Frankie, don’t expect Tim – and his fellow cast members for that matter – to be carbon copies of the real-life men they are based on.

Tim continued: “We were conscious that we were not going for a Frankie Valli impersonation. Every Frankie around the world is a different performance. Though of course you have to get the essential elements, such as getting the falsetto voice – otherwise you basically don’t get to play Frankie. So the directors give you a framework to work within, but beyond that it’s your own interpretation.”

For resident director Alli Coyne, getting involved in the international hit show has been an eye-opening experience.

“I didn’t know what naughty boys they were,” she said wide-eyed.

“And how they learned all those harmonies while they were in prison. Also, the fact it was such a black sound was because the prisoners they were in with were largely black. I think it’s an amazing story and I love to be part of this opportunity to give that story to everyone else.”

Tim agreed that inhabiting the roles of these larger-than-life figures of the music industry has been a privilege and a joy. The Belgian-born performer actually had the chance to meet Frankie Valli himself recently which has added to the richness of his portrayal on stage. 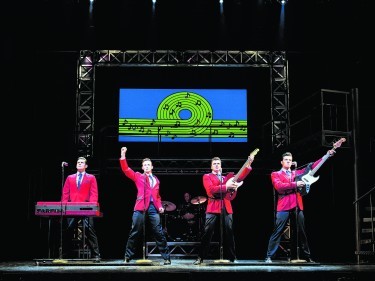 Tim said: “Frankie started at 15, and he’s now 80 and still going. He’s a grafter – music is his life. Relationships come and go, family can’t always be kept together, but music is his one constant. Which is ironic, because the music industry really isn’t very constant.”

When they met, funnily enough, Frankie was the one in awe of Tim and his cast mates.

“Frankie said to me, ‘I don’t think I could have done what you guys do in my day. I commend you.” Tim said.

Like Frankie, Tim is firm in the belief that the success of the Four Seasons, and Jersey Boys in turn, is down to the combined talents of all involved.

“It’s not just about Frankie, Nick or Bob. It’s about the group. There’s no one particular arm of the Jersey boys or Four Seasons that make it a success. It was the Four Seasons as a whole that made the sound of the generation.”
Jersey Boys will be at HM Theatre, Aberdeen, from Tuesday, March 3, to Saturday, March 14. Tickets and show times, including matinees, are available from www.aberdeenperformingarts.com or by calling 01224 641122.

Vestas takes most radical step yet toward zero turbine waste

Vestas Wind Systems, the world’s largest maker of wind turbines, has pledged to eliminate all waste in the production of its machines by 2040 as part of its drive to hit carbon neutrality by the start of the next decade.

ROLLING BACK THE YEARS