The contest for the Western Isles is one of the more unusual in Scotland in that it is a rural seat fought between the SNP and Labour.

Unlike other remote constituencies, the Lib Dems and Conservatives have traditionally had little role in the fight for Na h-Eileanan an Iar, to give it the Gaelic title by which it is known at Westminster.

Defending the seat for the SNP is the colourful figure of Angus Brendan MacNeil, a native Gaelic speaker and one of the party’s more radical voices when it comes to battling for a second independence referendum.

Mr MacNeil is a leading politician in the SNP fringe, which has expressed frustration at what he sees as the cautious approach to the issue taken by the party leadership.

The Labour challenger is Alison MacCorquodale, an economic development officer with the local council and a Unison activist.

Her campaign has been focused on ending “Tory and SNP austerity”.

Although it is the smallest seat in terms of electorate of any in the UK (21,301), it presents considerable geographical challenges, running from the Butt of Lewis to the most southerly inhabited island of Vatersay.

Therefore it has its own distinctive issues when it comes to politics – notably concerns over the ferry service, where there has been disruption as a result of Calmac’s ageing fleet.

And over the last few years green energy has emerged as a key topic, with crofters looking to develop wind-generated electricity on common grazings.

Crucial to that is energy regulator Ofgem’s decision not to give the go-ahead for the proposed subsea Western Isles Interconnector. 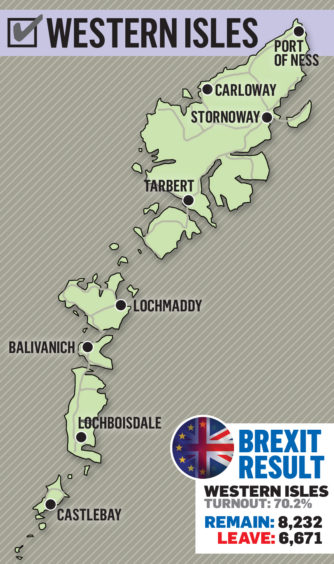 The undersea cable was proposed as a way of connecting planned new wind farms on the islands with the National Grid.

Local politicians across the parties have expressed dismay at the decision but are hopeful that Ofgem may think again.

For both the SNP and Labour, the Western Isles holds a special place in their history.

In 1935, it became Labour’s first non-urban Scottish seat when it returned Malcolm K. Macmillan, who held it for 35 years.

Then it became the first general election seat won by the SNP, in 1970, when Donald Stewart seized it and went on to serve as the isles MP until 1987.

Labour’s Calum MacDonald took over from Mr Stewart before he was defeated by Mr MacNeil in 2005.

That 2005 victory makes Mr MacNeil one of the longest serving SNP MPs and he should be confident that he can take the seat once again.

The Lib Dems are unlikely to feature and the only hope for the Conservatives is if candidate Jennifer Ross can somehow hoover up some of the islanders who voted for Brexit, given that the constituency recorded a 45% Leave vote in the EU referendum.

Mr MacNeil did, however, get a shock two years ago when his previously comfortable majority was reduced to just 1,007 in Theresa May’s snap general election.

Despite Labour’s inroads last time round, the prediction is that the Western Isles will stay in SNP hands.

Constituency profile: SNP and Labour to face-off for rural seat on Western Isles